An Electroencephalogram (EEG) is a test that detects electrical activity in your brain using small, metal discs (electrodes) attached to your scalp. Your brain cells communicate via electrical impulses and are active all the time, even when you’re asleep. This activity shows up as wavy lines on an EEG recording.Electroencephalography is an electrophysiological monitoring method to record electrical activity of the brain. It is typically noninvasive, with the electrodes placed along the scalp, although invasive electrodes are sometimes used, as in electrocorticography.An Electroencephalogram (EEG) is a noninvasive test that records electrical patterns in your brain. The test is used to help diagnose conditions such as seizures, epilepsy, head injuries, dizziness, headaches, brain tumors and sleeping problems. It can also be used to confirm brain death.

An Electroencephalogram (EEG) is a test used to find problems related to electrical activity of the brain. An EEG tracks and records brain wave patterns. Small metal discs with thin wires (electrodes) are placed on the scalp, and then send signals to a computer to record the results.

An EEG records the electrical activity of your brain via electrodes affixed to your scalp. EEG results show changes in brain activity that may be useful in diagnosing brain conditions, especially epilepsy and other seizure disorders.

Abnormal results on an EEG test may be due to: 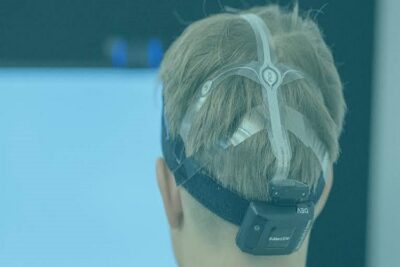 Electroencephalography (EEG) is an electrophysiological monitoring method to record electrical activity on the scalp that has been shown to represent the macroscopic activity of the surface layer of the brain underneath. It is typically non-invasive, with the electrodes placed along the scalp. Electrocorticography, involving invasive electrodes, is sometimes called intracranial EEG.

EEG measures voltage fluctuations resulting from ionic current within the neurons of the brain.[1] Clinically, EEG refers to the recording of the brain’s spontaneous electrical activity over a period of time, as recorded from multiple electrodes placed on the scalp.[1] Diagnostic applications generally focus either on event-related potentials or on the spectral content of EEG. The former investigates potential fluctuations time locked to an event, such as ‘stimulus onset’ or ‘button press’. The latter analyses the type of neural oscillations (popularly called “brain waves”) that can be observed in EEG signals in the frequency domain.